Belgapom has collaborated to the creation of the guidelines for the best available technology for the fruit & vegetable sector, which has been updated in 2014.
Some parts of this study can be downloaded in English.

Belgapom has been recognised through its umbrella association FVPhouse as a training office via a Q-for label. This allows companies to participate at Belgapom tranings & seminars making use of subsidies from the SME wallet (Flanders) and training cheques (Wallonie).

The vigorous growth of the Belgian potato sector needs to be supported by a continuous innovation along the complete potato chain. Belgapom organises every two years the international event for the potato, fruit and vegetable sector Interpom in Kortrijk Xpo.

Belgapom has also invested in a number of research projects, this in collaboration with Flanders Food and Walagrim.

Belgapom has been actively supporting the congress of the European Potato Research Association (EAPR) in 2014 in Brussels.

In 2017 WatchITgrow has been launched. This web application is resulting from the Ipot project in the framework of the Belspo activities, executed by Belgapom, VITO, CRA-W and ULG. This application offers potato producers the possibility to follow their potato fields via satellite images, linked to different information such as weather, soil, etc. This innovative tool evolves to a crop advice instrument. 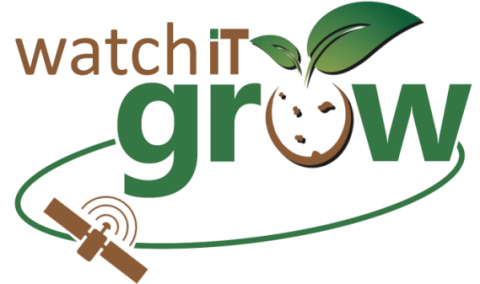 Via the Platform for the processing of and trade in plants and plant products, Belgapom has contributed to the creation of the Vegaplan standard, which allows producers of plants and plant products to get a certificate for their different commodities on the level of food safety, environment and technological quality. In 2014 a chapter on sustainabilty and IPM has been added.

Belgapom is also a partner of Vegaplan.be, that takes care of the management of the standard and the affiliated producers. This Vegaplan standard has been declared equivalent to similar systems in the Netherlands (VVAk & VV aardappelen) and Germany (Q&S).

In a collaboration with Vegebe and Fresh Trade Belgium, Belgapom has worked out the Self Checking Guidelines for the potato, fruit and vegetables trade and processing industry, which allows to assure the food safety in these links of the chain. These guidelines have been recognised by the AFSCA on 3 January 2007 and helps companies to get a certificate or validation of the self checking system. These guidelines have been edited via a easy to use website in Dutch and French. 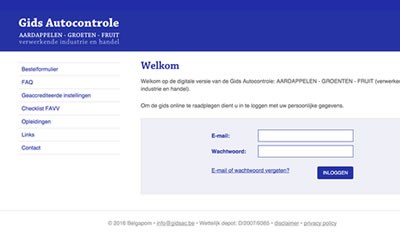 Belgapom is also working out a annual sampling plan for the potato sector, which includes a number of samples of ware potatoes tested on the presence of CIPC and heavy metals. These values are compared with the norms for food and feed. Also a number of samples are taken on seed potatoes to be controlled on the absence of brown and ringrot.
This samling plan (validated by the Belgian Food Safety Agency since 2010) helps the members to control the costs of this obligation.

In a number of starch holding food stuffs, such as biscuits, coffee and potato products (frites or chips) fried at high temperatures (> 120°C) the presence of acrylamide has been discovered. Despite the fact that the health risks have not yet been confirmed, the potato processing industry has taken a number of actions to reduce its presence in the frites and chips. This has lead to a 'toolbox' elaborated by the European association EUPPA and the food industry association Food Drink Europe, which is also used by the European Commission as a reference on its website. The European potato processors' association EUPPA has launched a multilingual website Goodfries.eu to illustrate the good baking off practises for fries. 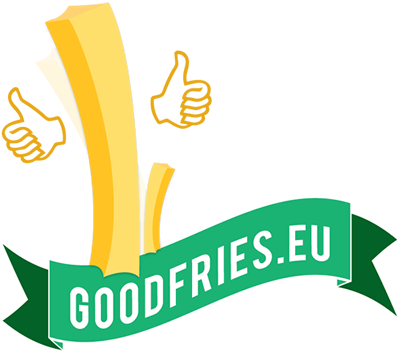 Belgapom has edited washing cards for Bintje and firm cooking varieties. These cards create 5 classes for fresh washed potatoes based upon external quality. These cards are available at the Belgapom secretariat at € 15/set.

The Belgian potato processing industry has imposed on itself a number of quality standards for the production of prefried frozen frites. these standards concern the composition, quality and colour of the product and have been deposed at the Belgian Federal Public Service for Economical Affairs in 1998.

The prevention of the presence of harmful organisms on plants (such as brownrot or ringrot), wart disease a.o.) remains a high priority for Belgapom and the Belgian potato sector, taking in consideration the free trade of seed and ware potatoes on the common European market.

Belgapom has taken the initiative to defend the interest of the profession in its relationship with the competent AFSCA.
In collaboration with the agricultural associations and test centres for potatoes, Belgapom has developed a prevention plan for 'nematodes'.

In the framework of the self checking legislation the companies have to organise a plant health sampling scheme. Belgapom tries to increase the efficiency by means of a sectoral sampling plan.

Belgapom is providing to its members a regular overview of the potato market.

Belgapom is also a partner of POMMAK, the online price information platform for the Belgian free market for potatoes.

Belgapom is advising its members to create good buying and selling contracts. Also the guidelines for good contracts between the trade and processing industry on the one hand side and the farmers on the other hand has recently been worked out by Belgapom in collaboration with the farmers' unions.

Despite the contract framework operators can be confronted with problems in the execution of it. Belgapom gives free adivice for members about RUCIP, the European quality scheme including an experise and arbitration system executed by the European RUCIP secretariat in Brussels.

Belgapom participates in the generic promotion for seed and ware potatoes via the Flemish VLAM and the Walloon APAQ-W.

A recent campaign in partnership with the UK and France has been subsidised by the European Commission.

Belgapom is also active in the promotion of exports of seed and consumption potatoes in collaboration with VLAM, FIT and AWEX.

Belgapom participated with an original Belgian friterie in the Belgian pavillon at the World Expo 2015 in Milan, wich was organised under the theme 'Feeding the planet, energy for life'.

Within this framework Belgapom had launched the book : 'the potato in Belgium, land of the fries' and the figure of James Bint, with a license to fry. He became the worldwide ambassador of the real 'Belgian fries'.

In 2017 a 3 year lasting promotion campaign in 5 South-East-Asian countries has been launched with the theme : 'Belgian fries, from the heart of Europe'. This campaign is running in collaboration with VLAM, APAQ-W and 5 Belgian companies and with the support of the European Commission. A followup of this program has been launched in 2020, focusing on the following Asian countries : China, Japan, South Korea and Singapore. 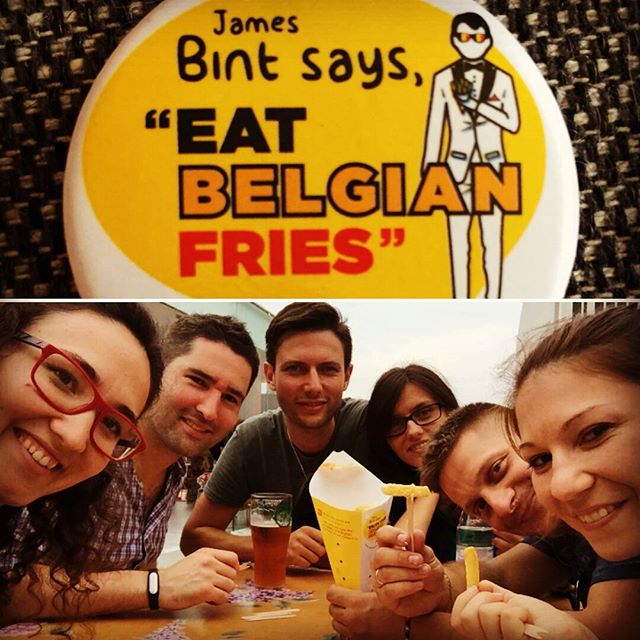 Belgapom has - together with the social partners - worked out a new function and wage classification for the potato processing and peeling industry.

Potato cultivation is a relatively local type of cultivation for which only limited transport is possible due to the nature of the product (a potato consists of water for some 80 %).

For economic reasons, numerous measures are taken at company level to limit the environmental impact of the transport as much as possible:

Succeeding the UN International Year of the Potato in 2008, Belgapom has decided to offer in 2012 - 2015 a sustainable support to the TRIAS development project Conpapa in Chimborazo (Ecuador). This project has also been supported by the Belgian developpent program 'enterpreneurs for enterpreneurs'.

Belgapom has choosen a task manager in the person of Marcel Delamillieure in order to guarantee continuous counselling. The Belgapom members were invited to set up actions to provide the project in Ecuador with further development tools in order to create local sustainable welfare through potato related activities.

Belgapom has collaborated to organise a working visit of a delegation of farmers of Conpapa in the Belgian potato sector during the spring of 2013. Improved crop techniques, the construction of a storage facility has been realised.

Also a budget has been raised by the Belgapom members in order to finance the purchase of storage boxes for this potato cooperative in Ecuador by sponsoring a 220 km hike to Santiago de Compostella by one of the Belgapom board members.

Finally thanks to a collaboration between Belgapom, TRIAS, VTI and Rotary Torhout a unique sorting, washing and packaging device has been developped which enables the farmers of this cooperative and their families to continue their activities in an independent and sustainable way.

In 2016 the following partners Belgapom, VTI & VLTI Torhout, TRIAS and ILVO have decided to put their shoulders under a new project together with the potato cooperative Coopagros in Andahuyalas in the Andes of Peru. Due to the climate change the production of chuños ( freeze-dried potatoes), based upon a hundreds of year-old technology, is at risk as nights with frost are no longer assured. The chuño-coalition wants to help with construction of an adapted freezer to assure this valuable potato product and the income of the farmers and their families.

The different partners have presentjes their project unde the name 'Coalición Chuño' at the fair Interpom Primeurs 2016 in Kortrijk in presence of Herman Van Rompuy, the first President of the European Council. 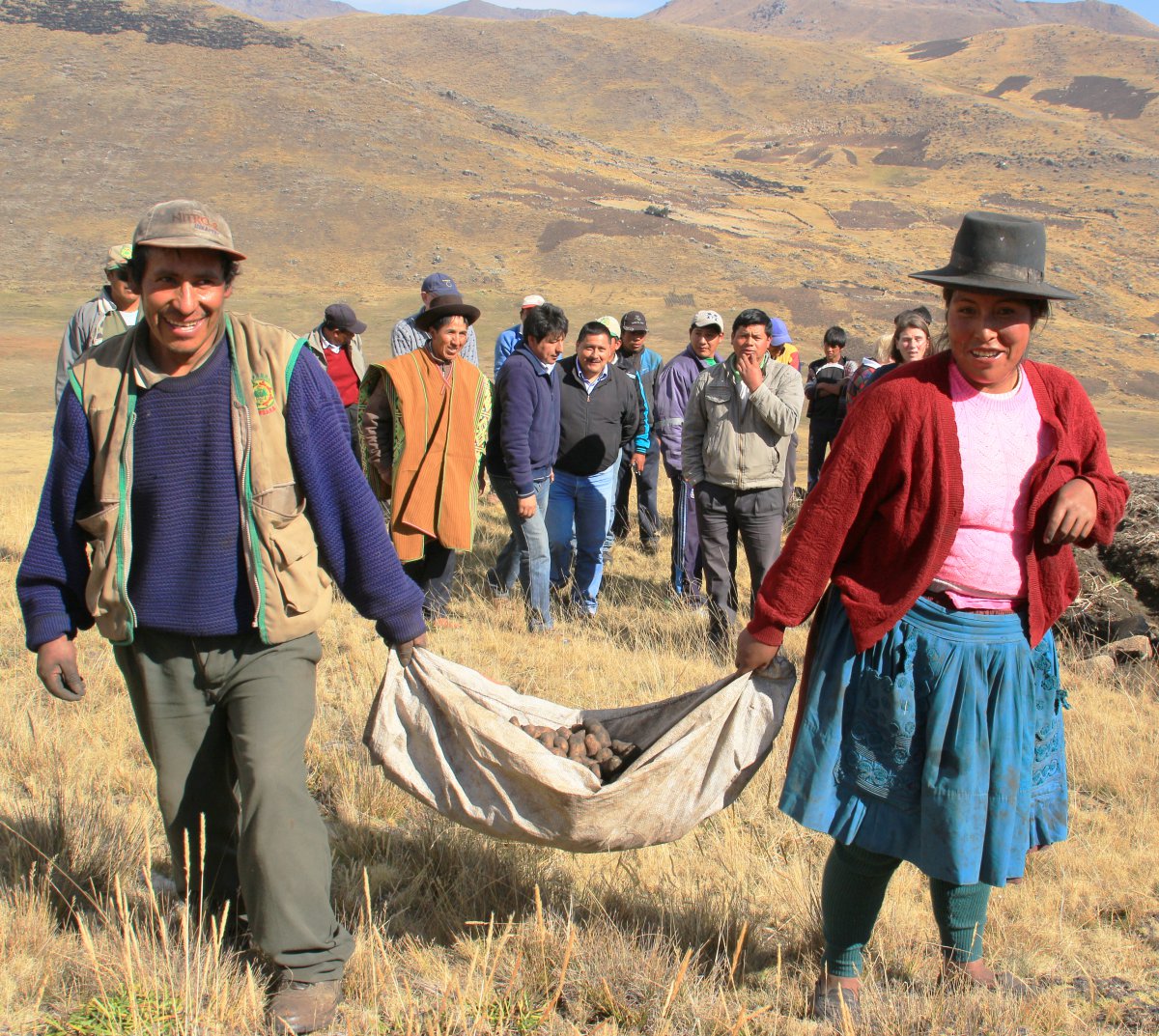 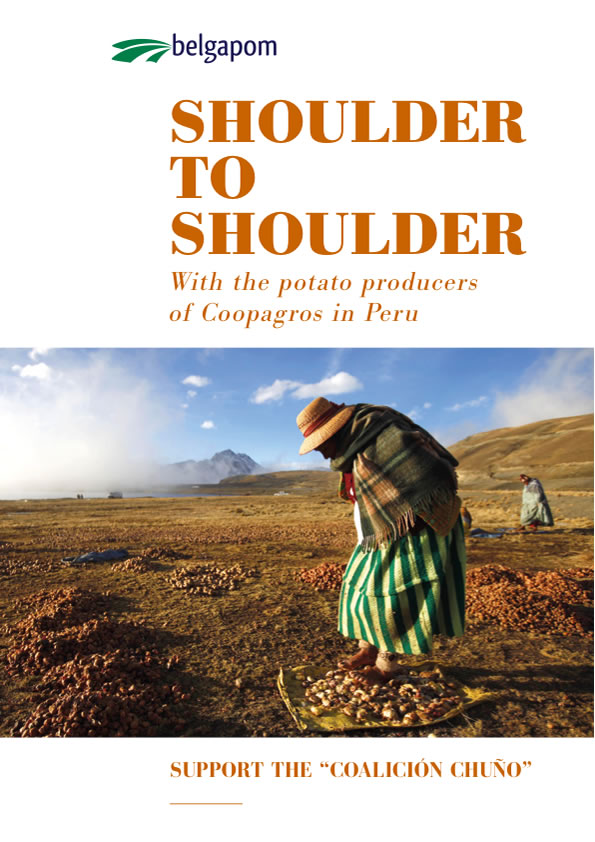